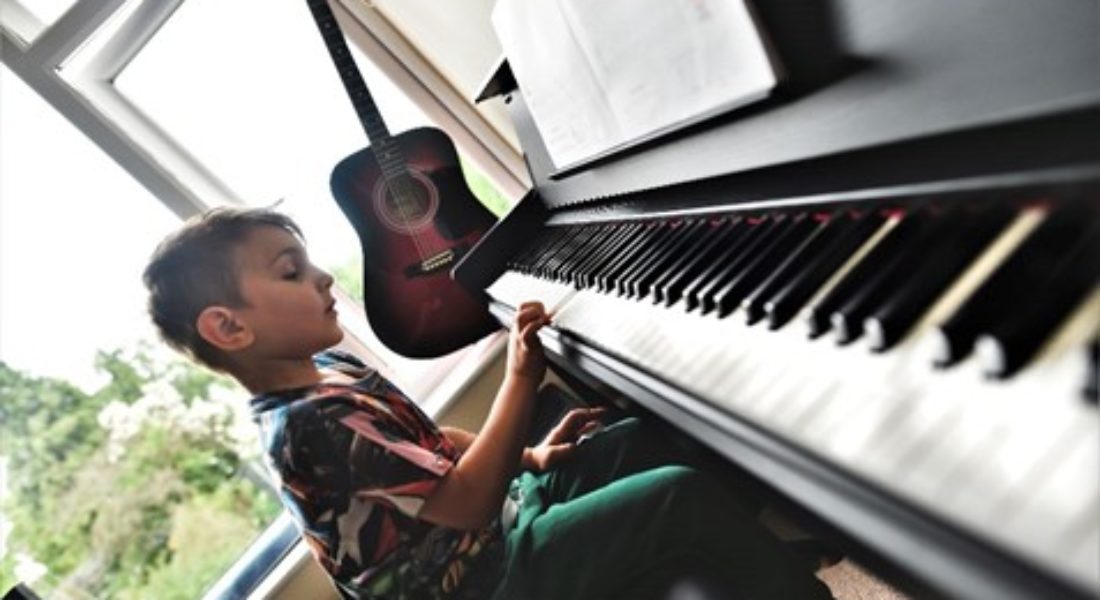 We are huge music fans in our family and over time I have been trying to build up my music corner, which you can see below:

One day I hope to have my own music studio where family and friends can create and record music at the drop of a hat. But, the star of the show in my music corner is the Yamaha Arius YDP-S34 Digital Piano – a beautiful piece of digital equipment that makes playing the piano a breeze. If you’re interested in music and would like to learn more about how to involve your kids in their own musical journey, then please check out my other articles below:

Article 3 – Music therapy for children with ADHD and anxiety

The Yamaha Arius YDP-S34 is a digital piano, which means that you don’t have to tune it – ever! You just plug it in and away you go.

Just like a real acoustic grand piano, you get 88 keys with the Yamaha Arius YDP-S34 digital piano, and it feels like a real piano to play as well. The graded hammer keys are weighted which means there is a resistance when you play, just like the traditional piano. And the keys are also touch sensitive which means you can create a subtle change in tone and sound by merely lifting your fingers from the keys. The Yamaha Arius YDP-S34 digital piano also has Intelligent Acoustic Control which means the digital piano adjusts the sound automatically to enjoy balanced piano tones at any volume level.

The compact design of the piano is slim and modern. It’s built to be tucked away into a corner if you don’t have space for a grand piano. The sound is deep and rich, just like the sound of a real acoustic grand piano, and this is down to the CFX Grand Piano Voice sound, i.e. this digital piano features the sound of the Yamaha’s flagship concert grand piano.

There are three piano sounds built in and on the left-hand side of the digital piano you have buttons that allow you to scroll through the different sounds including a more mellow piano sound, or a brighter piano sound. There are other sounds available, which means you can pick the sound according to what you’re playing, which is amazing. You even get 50 classical music masterpieces built into the digital piano as well!

You also have recording capabilities so that you can, for example, record one hand and play along with the other to practice learning a piece step by step. This is a very handy tool when you’re at the beginning of your piano journey.

The Yamaha Arius YDP-S34 comes in three colours. We have a black digital piano, but you can also choose white or white ash.

When registering your Yamaha Arius YDP-S34 digital piano online, premium members will receive three months membership to Flowkey, which is a nifty app that you can use alongside your Arius to play along to popular tunes while learning the notes on the piano. You can also download the Smart Pianist App from Yamaha and control the piano from your smart device as well!

With the Yamaha Arius YDP-S34 digital piano, you get a stereophonic optimiser which allows you to have an immersive experience when you use your headphone to play.

And when you’re finished playing on the piano, you won’t be able to slam the door closed because the Yamaha Arius YDP-S34 digital piano comes with a slow-closed fallboard. Perfect for kids with heavy hands!

This breathtaking digital piano from Yamaha is very elegant and powerful, with beautiful sounds emanating from the speakers that are akin to a real grand piano. I love the weighted, touch-sensitive keys that allow you to immerse yourself into the music when you play, and the recording function is a great way to practice as you can playback and hear how you’re getting on with the piece that you’re practising. The metronome function is excellent for kids too when you’re trying to teach them music theory. And, it’s a great piano to have if you are low on space too – the digital piano is so slimline that you can tuck it away into the corner of the room and it won’t take up much space.

Personally, I love this piano, and I would recommend any beginner, intermediate or advanced piano player to give this digital piano a shot. It’s the best out there for that acoustic grand piano feel with the least amount of footprint!

Where can I buy the Yamaha Arius YDP-S34 digital piano?

You can buy it from Yamaha Music London’s website here: Buy here

If you want to try out Yamaha’s range of digital pianos, including the Yamaha Arius YDP-S34, then head over to Yamaha Music London’s headquarters in Soho. They are hosting another Learn to Play event on 22nd and 23 March 2019, where you will get the chance to learn how to play, not only the digital piano, but you can also try the violin, trumpet, Venova, bass guitar and trombone, as well as the electric and acoustic guitars. Get there early as spaces fill up fast! The store opens at 10.30am and then it’s first come, first serve! The address is:

Play to win with Yamaha!

Yamaha Music London is also hosting a fantastic competition to win tickets to a very special Royal Philharmonic Orchestra concert on 29th March 2019. As part of World Piano Day, the 88th day of the year (88 being the number of keys on a traditional acoustic piano), this special day provides the opportunity to celebrate everything to do with the piano, i.e., the performers, the listeners and of course the instruments themselves!

You don’t need to book anything, just turn up and explore Yamaha’s award-winning range of instruments. Located on the first floor of the Yamaha Music Store in London, you will find the unique Yamaha Piano Hall that holds a breathtaking range of instruments. In fact, the last time I was there I had constant goose pimples on my arms from the sound of beautiful music being made.

Film yourself playing an extract from Bach’s Prelude in C Major (BMV 846) on a Yamaha piano or keyboard and upload the video to Facebook or Instagram before 28th March 2019, tagging #YMLPianoDay.

The winner will receive a pair of tickets to a very special concert performance of Peter and the Wolf by The Royal Philharmonic Orchestra at The Royal Albert Hall in June 2019.

How clean is the air we breathe at home?...

Decorating your walls with Graham &...

How Ecover Washing Up Liquid can clean b...

Copyright © 2010 - 2020 Motherhood Diaries. All rights reserved.
5shares
We use cookies to ensure that we give you the best experience on our website. If you continue to use this site we will assume that you are happy with it.Ok