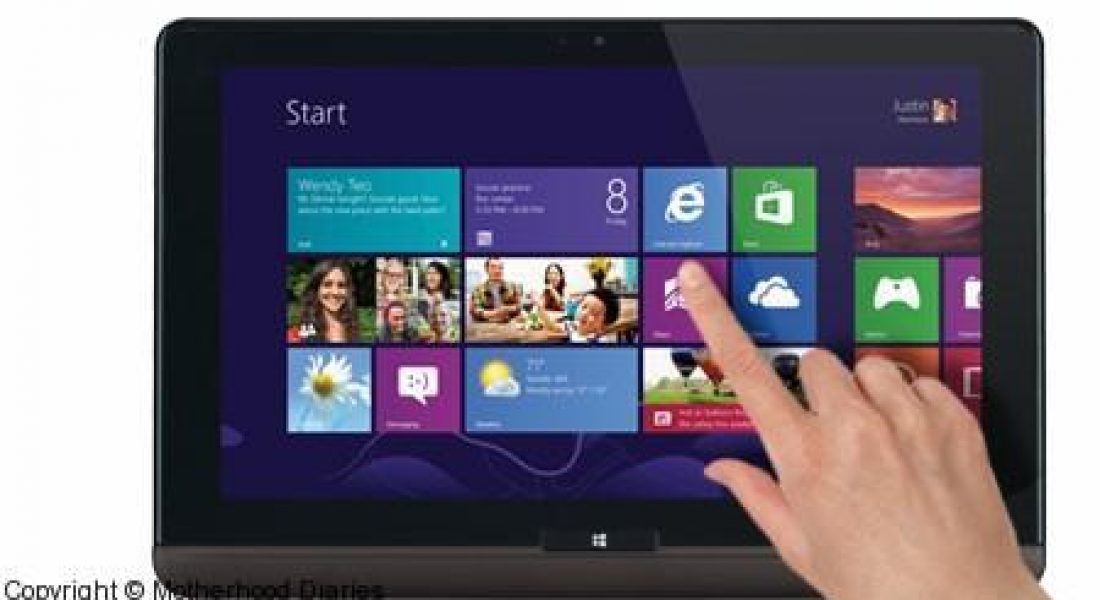 Video to the Lenovo review here:

There are quite a few ways you can have the Ultrabook:

The Satellite U920t is quite a large screen Ultrabook at 12.5 inch (1366 x 768). On the left of the Ultrabook, you have the power button, the volume buttons, a lock switch and a USB 3.0 which allows for quicker file transfers, as opposed to the normal USB 2.0 ports you get on most machines.

There is a Windows 8 physical button at the bottom of the screen, which allows you to go in and out of the Windows 8 menu screen. You just click the button to get to where you were on the desktop and then click again to get back to the menu.

The Ultrabook doesn’t have an HD resolution screen, but the colours and graphics display are very impressive anyway. The colours are bright, slick and clear, and definitely above average. The Ultrabook uses a 3rd generation Intel Processor, so you have got 4gb of RAM, which means it’s quite fast and efficient, and 128gb of hard drive, which I think is more than enough to store your data.

Tablet with the trackpad and back camera activated

You slide the tablet screen back slightly to just past the trackpad until the screen clicks into place. You can use the trackpad whilst in this form and take pictures using the 3 Megapixel Camera. On the front of the tablet you have a 1.3 Megapixel camera for those all-important head shots!

I wouldn’t say the touchscreen was super responsive. I did find some problems when I was trying to fill out some forms online on certain websites. I found it quite difficult to select options. For example, when I went onto my own website, www.motherhooddiaries.com, and clicked on ‘Contact Us’ in tablet form, i.e. with my fingers, it wasn’t responding straight away, so I ended up using the trackpad. This kind of defeats the object when using the Ultrabook in tablet form. Unfortunately, when you are on the web, you can’t zoom in and out using your fingers as you would normally be able to do on a Smartphone, usual tablet, or iPad. But, I noticed that you were able to zoom in and out when using Windows 8 Apps and Microsoft Office programs.

The online/internal keyboards pops up when you’re in tablet form and there’s nothing wrong with the keyboard at all, it’s very responsive.

If you slide the tablet even further back, the physical keyboard comes into play. You simply tilt the screen forward and the tablet turns into a laptop! The screen is quite sturdy, you can turn the lid at any angle and it stays at that angle.

The keyboard is quite compact, but very easy to use. As a touch typist, I had no problems with this keyboard at all when typing documents. As a mum with a small business and a blog, I mostly use WordPress and Microsoft Office products, as well as the internet, to run my business. I found all of these applications very easy to use on the Ultrabook. I was so much more efficient when I was able to use the touch screen as well as the trackpad and keyboard to type my documents and publish my blog posts.

The video and music functions were very easy to work on the Ultrabook and I found the video and sound quality (stereo speakers are on the front side of the keyboard) to be very high performance and there was no lagging when a video was played. Even though the Ultrabook doesn’t use an HD screen, the video comes out very clear anyway and the sound is great. I found I never had to max out the volume to play the video loudly. You can use the physical Windows 8 button to pop in and out of the Windows 8 menu and the music would still be playing in the background. Pausing and rewinding on the touch screen was very simple to use.

With the Ultrabook, you’ll get an information sheet, which will show you how to use the laptop and tablet together. You will get an instruction manual for safety and comfort, with a limited warranty inside, and you get a quickstart leaflet, which will show you all the accessories that that are included with the Ultrabook, and the functions that are available, including hotkeys.

What I liked the most:

As a small business and blog owner, I have multiple screens open and bombard my laptop with many, many files that are open and loaded all the time. This is what I found to be the most impressive when reviewing the Toshiba Ultrabook. It can handle many webpages open at the same time, as well as my Microsoft Office applications and a number of Windows 8 applications. At one point I had 8 different applications open and the Ultrabook still worked efficiently.

I charged the Ultrabook fully before completing the review and found that I had 23% (40 minutes) of battery remaining after 5+ hours, so I know I can rely on the battery when out and about at meetings or in public places that do not have a socket nearby to plug in the charger.

What to watch out for:

You are not able to zoom in and out with your fingers on certain websites like you would be able to on a Smartphone or a normal tablet, and filling out forms using the touchscreen wasn’t easy – it had a mind of its own!

On occasion, some of the Microsoft Office programs did stall when opened, but I suppose that was because I had far too many windows open and I probably maxed out my 4 GB of RAM. But, I didn’t find that these multiple programs effected the speed and performance of the Ultrabook at all. The amount of RAM offered means you have plenty of space and the 128 GB hard drive allows you to store a lot of data too.

There is no DVD/CD ROM accessory, which might be a downer for some people who use DVDs and CDs, but I use external hard drives and USB pen drives, and don’t forget that you have the normal sized memory card reader that comes with the Ultrabook. You will be hard pushed to find a laptop/tablet hybrid that will have a DVD/CD ROM because of its tablet functionality.

The Ultrabook is on the market for £910 to £1,149, so it is quite pricey, but this device is more than enough to work on my business and blog.

I am definitely converted to the Ultrabook! It is definitely high performance, although I had a few issues with some of the Microsoft Office programs – they stalled on occasion. I found Skype to be responsive for those all important business calls and Outlook works fabulously on the Ultrabook – emails download quickly, especially the hundreds I get every day! I use WordPress for www.motherhooddiaries.com, which is sadly not a Windows 8 app, but the internet version is just as effective anyway.

I found it easier to use the touch screen and trackpad together when the Ultrabook was in laptop form. I do use the mouse when I’m trying to find something quickly, but the fact that you are able to use this Ultrabook as a tablet as well is even better. I found it a lot easier to scroll down webpages and documents using my fingers than the trackpad, which makes surfing the net much quicker and more efficient. Where you would use a trackpad to scroll up and down on a normal laptop, this hybrid gives you the option to use the screen as an additional tool to surfing the net.

The Ultrabook has all the equipment I need to run my business and blog, and it’s lightweight, so it’s a breeze to take to meetings. I can just slide the laptop back to tablet form to conduct presentations and share important data, including showcasing my website!

I would definitely recommend this device to any business owner for an all-in-one package in which to run your business.

I award this Ultrabook 4.5 out 5 stars for overall performance. Where it lost out on half a star was the occasional unresponsive touchscreen, but I got my way around the webpages by just using the trackpad.

Parents – which technology equipment do you recommend for effectively running your business/blog? Please send in your comments and questions!

Things Every Family Should Remember When...

The evolution of maternity dresses

Spending time on Sunday with the new loo...

Copyright © 2010 - 2020 Motherhood Diaries. All rights reserved.
7shares
We use cookies to ensure that we give you the best experience on our website. If you continue to use this site we will assume that you are happy with it.Ok